Your browser is not supported
For an optimal experience, please use
one of these browsers: 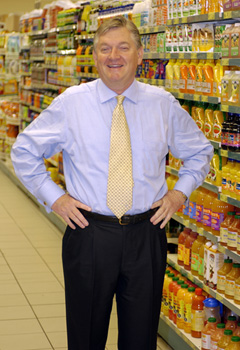 Whitey Basson was born on the family farm Dasbosch in the Porterville district on the 8th of January 1946 to parents Jack and Maude Basson, who had another boy and girl.

Jack Basson initially practiced law and joined the allied forces during World War II. He was recalled to South Africa to enter a career in politics.   While Basson SR resumed farming, he also became involved in business during his career.  He was an active member of the then United Party under General Smuts and remained loyal to the principles of that party until he retired from politics.   Maude Basson was the eldest daughter of Hendrik Johannes Nel, a lawyer in the Calvinia district, who was one of the first graduates from the Old Victoria College in Stellenbosch.  Whitey Basson attended school in the small town of Porterville and completed his secondary education at Rondebosch Boys High School in Cape Town where he matriculated in 1963.

After considering a career in Medicine, Basson opted for a life in business and completed his BCom CTA from Stellenbosch University. In 1970 he qualified as Chartered Accountant after serving his articles with Ernst & Young Chartered Accountants, at the time known as ER Syfret & Co.

From mid-1970 and in 1971 he practiced as a Chartered Accountant with the then Brink, Roos & Du Toit in Cape Town, now PriceWaterhouseCoopers, after which he joined Pep Stores Ltd, a client of his, as financial manager.   In 1974 he was appointed to the Board and remained a member until 2004.

Basson’s career at Pep Stores provided him with many challenges and opportunities. He switched from financial director to the head of operations in 1974, an office he held until late 1978 where he was responsible for all operations and actively involved in building the Pep Stores brand and company.

During that time, he developed a passion for rebuilding troubled companies and his first major acquisition was the Half Price Group, which he integrated into Pep Stores.   During 1979 Basson reached agreement with the Pep Stores board to actively identify acquisition opportunities or start a new venture in the food retailing business. This suited his passion for trading in fast moving consumer goods.  During November of 1979 he was able to acquire a small 8-store Western Cape grocer, named Shoprite, from the Rogut family. This was the start of the development of a dominant supermarket group in Africa.

During 1980 the company was restructured; some of the old stores were closed and new stores were opened.  In that period, he realised that the corporate identity of the company had to be changed and that to grow the company at its maximum speed the focus had to be targeted towards the middle to lower LSM market, which by far represented the largest portion of the economically active population of South Africa.  He however realised that to achieve his goals, acquisitions and turnarounds of struggling companies had to be a priority. At the same time Shoprite lacked growth potential for new openings as, it was not considered by the majority of property developers as anchor tenant due to the size and limited advertising spend of the company.

Basson’s first acquisition was six old Ackermans food stores, which were controlled by the Edgars Group, in 1984. During the late 1980’s one of the most dominant players in the Western Cape, the 27 store Grand Bazaars Group, came up for sale and a deal with Shoprite was almost concluded. But the opportunity was lost in the closing stages when it was sold to Basson’s good friend Carlos dos Santos, who then operated a wholesale company out of Gauteng.

During the 1980’s the company tested the waters in rural markets and started slowly closing in on cities. By 1998 the company had tentacles out in the North Western Cape and as far afield as the most Northern areas in Mpumalanga and other areas where the market was big enough to quietly creep in under the radar screens of the major supermarkets, which at that stage was dominated by the Pick ‘n Pay, OK Bazaars and Checkers.

In 1990 Basson approached Dos Santos and bought Grand Bazaars at what was considered an even better price than the original deal.

With reasonable market dominance in the Western Cape Shoprite now had a platform from which it could accelerate its growth and on two occasions the Checkers Group, which was running into financial troubles, were approached. The first acquisition attempt was unsuccessful due to, what Basson describes as, too many people having unrealistic views of the value of a specific number of stores, compared to an efficient operation that was focused at a particular end of the market.

The Shoprite Group was listed on the JSE Securities Exchange during 1986 and apart from a few thousand shares that were issued in a private placing the Group’s capital base still consisted of the R1 million originally paid for the 8 initial stores plus the accumulated profits over the years to 1991.

Basson pursued Checkers a second time and as a result of Basson’s personal relationship with the then chairman of Sanlam a deal was struck which saw Shoprite reversed into the holding company of the Checkers Group and majority control was obtained of the total which now became the Shoprite Checkers Group. To turn around the loss-making Checkers group was a mammoth task as Checkers at that stage comprised of 169 stores and its losses equaled the turnover of Shoprite. With the purchase of Checkers Basson saved 16 500 jobs.

Within a period of nine months the Checkers chain was turned around and Shoprite Checkers became a profitable company trading across all LSM’s with a total of 241 stores.  For the first time Shoprite was offered the opportunity to compete in the modern shopping centres that were being developed. Despite being operated under two brand names; the company was able to trade selectively in the different markets targeted by the stores in the Shoprite or Checkers brands respectively.

The real break for Shoprite came at the end of 1997 when the OK Bazaars, which at that stage was losing more than the profits made by the Shoprite Checkers Group, ran into major financial difficulties and a R1 deal was struck with the South African Breweries; the sole shareholder of the OK Bazaars chain.  Once again the management of Shoprite was able to return OK to profitability and a process was embarked upon to separate the brands according to the specific catchment areas and markets where the stores were located.   The OK brand was kept alive and turned into the OK Franchise Division while the OK Furniture and House & Home branches were consolidated into an OK Furniture company. The Hyperama stores were converted to Checkers Hyper stores.  The OK takeover was a mammoth task as more than 150 food stores had to be converted and modernised.   At the same time 14 091 jobs were saved.

During 2001 the decision was finally taken to market the companies under the Shoprite and Checkers brands separately and strategic plans were adopted to reposition the Checkers brand as close as possible to its major rival Pick ‘n Pay.

As Basson was always interested in low cost limited assortment stores such as the Aldi’s of Europe, which incidentally was the first project he studied before acquiring Shoprite and nearly saw him ending up in a joint venture with an Italian group, its policy of centralised warehousing now offered the opportunity to start the Usave chain that trades in even lower LSM’s than the Shoprite brand with a cost structure that could afford a 50% reduction in gross margin while still offering excellent returns on investment.

The success of the Checkers repositioning has resulted in it becoming the fastest growing brand in South Africa and while forfeiting almost 4% in market share due to the closure of unviable OK Bazaars stores, the Group’s core business slowly increased market share and is enjoying close on 30% market share in the formal retail food market of South Africa.

One of Basson’s most ambitious dreams was to extend Shoprite’s operation to countries on the continent beyond South Africa’s borders and after the release of Nelson Mandela in 1995, Shoprite opened up new stores in Africa; the first one being in Lusaka, Zambia. His personal dream was to drive down food prices in Africa and to make sure that the food security in the major cities on the African continent would bring Shoprite the approval and support of African leaders. Probably the Group’s biggest achievement up to now is its investment into modern supermarkets in countries in far north as Nigeria and Ghana.

Basson also admits to failures after having closed down the Group’s supermarket businesses in Egypt due to restrictive legislation and red tape, and later in India and Tanzania to pursue business interests elsewhere on the continent, most notably on the lucrative West Coast of Africa where the Group is increasingly strengthening its position.  He is however bold in the sense that he has always believed that for a retail company to grow it needs as a portion of its earnings to invest risk capital as retail companies need to develop new markets.

Shoprite is still trading from its corporate offices in the Western Cape with the main listing on the JSE and listings on the Namibian and Zambian Stock Exchanges.

According to Deloitte’s Global Powers of Retailing 2015, the Group ranks as Africa’s largest retailer and 107th biggest in the world. Financial Mail's Top Companies ranks Shoprite Holdings as 11th in the 2013 SA Giants list.

Throughout Basson’s leadership of the Group spanning 37 years, he persisted with his dream to expand even further on the African continent.

On 31 October 2016 Basson, then aged 70, announced during Shoprite Holdings’ Annual General Meeting that he would be retiring as CEO at the end of that year.

Basson remained available to management for a further period of nine months and served on the Shoprite Holdings board as Non-Executive Vice-Chairman during this time.

Basson’s decision to retire brought to a close a remarkable career of nearly 45 years, virtually all of which was spent with Shoprite, in which the business grew from a small eight-store chain with a value of R1 million to a globally respected retailer with a market capitalisation of R114 billion, and almost 140 000 employees. 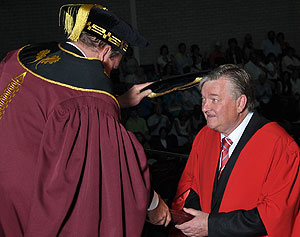