There are only five certified Master Butchers in South Africa, and all of them work for the Shoprite Group.

They went on to train the Group’s newly qualified Master Butchers: Songezo Basela, Khusela Dindili and Coenraad Vermaak, butchery managers at Checkers Willowbridge, Shoprite Belhar and Checkers Stellenbosch respectively. The three were informed of their success in obtaining this status in April this year.

A Master Butcher is a specialist in the butcher’s trade, who is conversant in meat processing practices from farm to fork. The programme took the three butchers a year to complete with each required to build up a portfolio that included modules on butchery expertise, business acumen and food hygiene and safety. 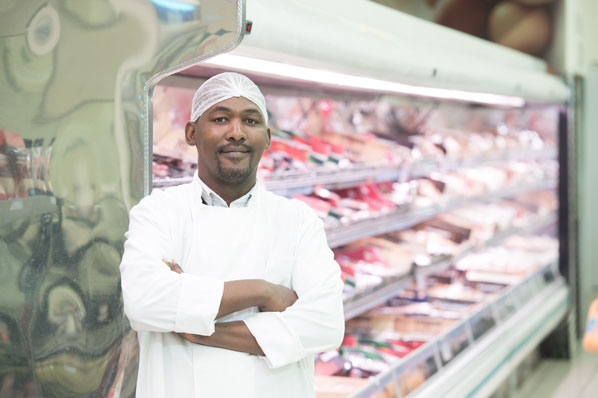 One of the Group’s newly qualified Master Butchers, Songezo Basela.

Basela (34) completed the Group’s year-long butchery learnership in 2009 and has been a Checkers butchery manager since 2015. Originally from Xesi near Alice in the Eastern Cape, he had more than a passing interest in meat, which blossomed into a passion during his training at various Checkers butcheries in Cape Town.

Dindili (32) is a Khayelitsha resident who came to Cape Town in search of work in 2010. He didn’t have a particular interest in butchery and enrolled for the butchery learnership because he needed employment. It has since also become an enduring passion and he’s been managing butcheries for the retailer since 2013.

Vermaak (30) is originally from Klerksdorp, but has been living in Western Cape for more than 13 years. He also started out as a trainee and has been managing Checkers butcheries for seven years. He says it has been a great privilege to attain Master Butcher status as it distinguishes them as specialist butchers, who are able to offer the best possible service to their customers.