From farm to table with Checkers artisan suppliers

Schoon Bakery and Gideon Milling, both from the Western Cape, are bringing their hand-crafted products to millions of people thanks to their relationship with Checkers. 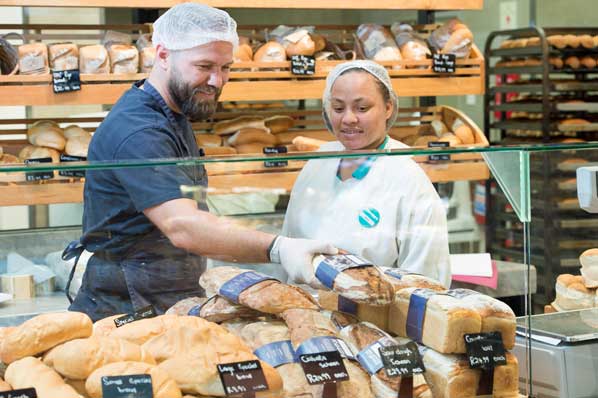 Schoon, which was started by Fritz Schoon in Stellenbosch more than seven years ago, supplies artisanal and high-quality breads and pastries to selected Checkers supermarkets*.

Working as a quantity surveyor, Fritz observed a general lack of nutrition for labourers on construction sites. This concern led to an idea for a small business of on-site kiosks selling pap and stew, but it was the huge consumption of half loaves that really got his attention and inspired him to set up his first bakery on his parents’ property in Stellenbosch.

Today his “manufactory” and cafes are built on the ethos of delicious high quality food, made with sustainable and real ingredients.

“Checkers approached me last year with the outlook of partnering with smaller producers who are driven by the right ethics and long term goals. At Schoon our products are focused on authenticity, health, sustainability and a high quality experience. It is a great business opportunity for us. Because of Checkers we can fulfil our ultimate goal and vision which is to put real bread back on the table and to revive a staple.”

The bakery only uses flour from Gideon Milling**, a local farmer and miller operating in Bellville, which has a similar ethos.

“Gideon Milling was started by a group of individuals to transform the way farmers relate to the retail sector by having more direct involvement in their produce through the value chain, and to be able to provide good quality, healthier products to consumers at affordable prices.”

A large percentage of wheat used in South Africa is imported, but according to Terblanche his company only uses local wheat with traceability for its stone ground flour. Gideon Milling was established by “a group of wheat-farmers to co-operatively own and operate their own mill and produce high-quality products at a comparatively affordable rate, and in so doing benefit both the farmers and the consumers.”

The Shoprite Group is passionate about supporting and growing local SMME’s such as Schoon and Gideon Milling. During its 2019 financial year, the Group gave more than 2 300 small suppliers access to its consumer market.

* Schoon’s bread and pastries are available at selected Checkers supermarkets in Gauteng, KwaZulu-Natal and the Western Cape, including: