The Shoprite Group has served over 5.5 million meals, or well over 90 000 meals every day, to South Africans struggling to put food on the table during the Covid-19 lockdown.

The Group is distributing food across South Africa – from Mafikeng to Bethelsdorp and Alexandra to Mangaung – to beneficiaries caring for vulnerable people including homes for the frail and aged, youth and community centres and havens. 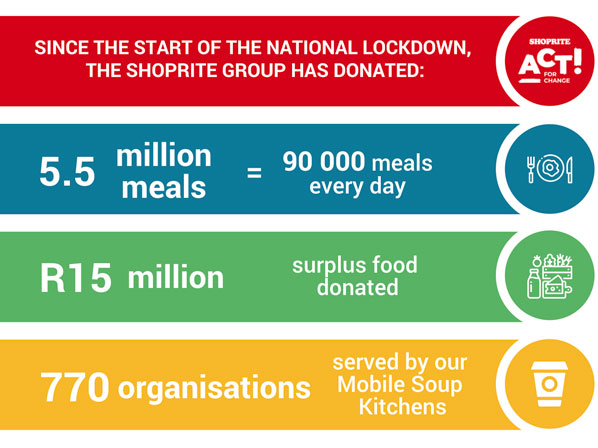 Beneficiary organisations have recorded a significant increase in the number of people in distress due to loss of income during the pandemic.

According to Stats SA among those that said their income had decreased, there were higher levels of hunger with over 11% reporting that they have experienced hunger.

This is the experience felt by many of the Group’s beneficiaries, where food donations are helping those people who are increasingly hungry during lockdown.

“They are getting nutritious meals to the extent that we are not cooking now – we rely on Checkers and Shoprite. It has made a huge difference – their life is much better than before”.

Jackie Botes, director of House of Hope in Welkom, says her organisation is feeding 500 people with the help of the Group, and as people find a job or are able to claim UIF they leave, and their place is immediately taken by others.

“This is not just about food. It is about human dignity.”

- Jackie Botes, director of House of Hope in Welkom

Some 770 beneficiary organisations have received nutritious meals delivered to them by the 23 Shoprite Mobile Soup Kitchens which continue to provide a critical service during times of crisis.

Heinrich Japhta, who drives a Shoprite Mobile Soup Kitchen in and around Port Elizabeth, says there is a marked increase in the number of people gathering outside when they are making a food delivery. “My heart goes out to these people because it’s clear that they're really suffering. I’m motivated to give my very best to help relieve their suffering.”

Japhta says he’s acutely aware that in order to keep on serving he must ensure his own and the health and safety of his team mates.

“Every day the soup kitchen is sanitised from top to bottom and we ensure we diligently adhere to the personal hygiene measures required by our employer and maintain social distancing wherever we go.”

The Group continues to add to the more than R3.3 million it has already raised for the Solidarity Fund in partnership with its customers.

It has developed virtual vouchers, which are sent via SMS to a recipient’s mobile phone within an hour of being bought. The voucher can then be redeemed for food and other household essentials at any Shoprite, Checkers or Usave store. The vouchers have proved to be the most efficient way for people to safely send food relief to family, friends and people they know are in need during the crisis.

Anyone wishing to give to the Solidarity Fund can do so via the Group’s Act for Change Fund, a till point donation facility available at all Shoprite, Checkers and Usave supermarkets.