The Shoprite Group has heeded the call of South Africans who want to give financial assistance to those communities left without water as the country remains in the grip of the worst drought in decades by introducing a till-point donation facility.

Members of the public will from 2 March 2016, be able to assist drought relief efforts while doing their grocery shopping at any Shoprite or Checkers supermarket by adding donations in increments of R5 to their purchases.

The Group has for months been reaching out to communities’ worst hit by the devastating drought through its own Project Thirst initiative in KwaZulu-Natal as well as partnerships with a number of other organisations in other areas left without water. It has in recent weeks donated more than 400 000* litres of water and delivered thousands more to communities experiencing water shortages.

The cost of collecting water and transporting it across vast distances is however prohibitive. It is economically considerably more viable to purchase large volumes of fresh water directly from supplier depots as close to the affected communities as possible. With Shoprite’s #ActForChange Disaster Relief Fund, the public can now assist to extend relief efforts substantially, as this will ensure that efforts are ultimately spent on purchasing water, rather than the transportation thereof.

The money collected will initially be used to bring relief to those communities affected by water shortages. From time to time however, the #ActForChange Disaster Relief Fund will also assist other disaster management initiatives on a national and community level, by providing relief to the people of South Africa in partnership with organisations like the SA Red Cross Society, Working on Fire and Foodbank SA.

The Group has always been committed to supporting communities in need. Shoprite’s Mobile Soup Kitchens have served more than 25 million cups of soup to date, while the Group has donated over R100 million of food to various organisations to fight hunger. Fire fighters and those communities impacted by runaway fires are supported all year round. With the #ActForChange Disaster Relief Fund in place, South Africans can assist the Shoprite Group in doing even more making a difference in the lives of those in desperate need.

#ActForChange ...together we can make a difference. 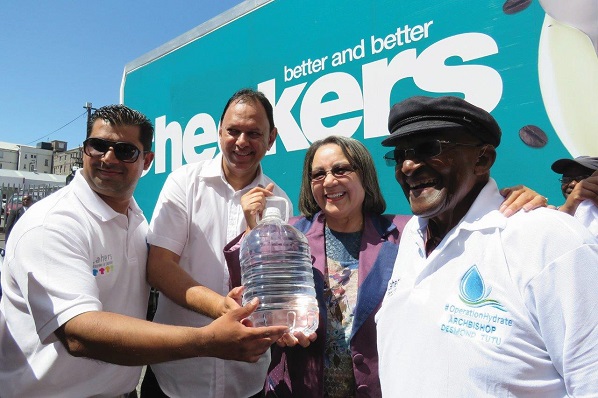 Shoprite Checkers were the first to donate water at Operation Hydrate’s Cape Town launch on 1 March 2016 with a total of 38 000 litres pledged. Cape Town Mayor, Patricia de Lille, Arch Bishop Desmond Tutu and the Tutu Foundation were also there to show their support.

To date the Shoprite Group has donated more than 400 000* litres of water and transported thousands more to assist communities left without water across South Africa, including (Vryheid, QwaQwa, Smithfield, Harding, Ixopo and others).