Local retailer slashes prices up to 50% for Black Friday

The world’s biggest retail sales promotion, internationally known as Black Friday has arrived at local supermarket Checkers for the first time in South Africa this week.

Black Friday is the Friday after thanksgiving Thursday in America when retailers break with massively discounted merchandise and the concept has mushroomed across the world. The term is historically known in the retail industry in America as the day on which business began to turn a profit (in the ‘black’) after having operated at a loss (in the ‘red’) since January. Black Friday is also considered to be the official start of the Christmas shopping season.

Checkers is the first food retailer in SA to cut prices up to 50% off on a range of selected general merchandise, food and liquor items for Black Friday this week on 28th November.

South African consumers will have access to unbelievable specials at Checkers supermarkets and hypermarkets throughout South Africa.

Conscious of the strain consumers are under in the current economic climate, Checkers are introducing this one-day Black Friday promotion to kick start its broad range of promotions for the Christmas period.

Announcing the momentous promotion Neil Schreuder, Marketing Director of Checkers, said that the Checkers Black Friday promotion will bring some of the American excitement to their stores for Christmas but the multimillion rand price cuts will be a welcome gift for consumers in trying economic times.

“It will help consumers considerably with Christmas savings and we have pulled out all the stops to ensure SA consumers will get unprecedented deals this Friday. They have been carefully chosen to suit our customers’ shopping needs this time of year and we are confident that consumers will rush to take advantage of this one day sales promotion of note,” Schreuder said.

All items are available during normal store trading hours, while stocks last and limited to three per customer.  The deals will be advertised in the media nationally from Thursday, 27 November. For more information and specific product details, visit the Checkers website or follow @CheckersSA 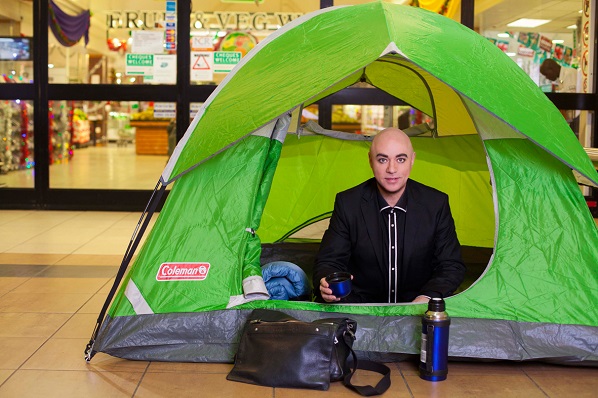 On hearing rumours that huge specials will be available at his local Checkers store on Friday, 28 November, for one day only, singer and entertainer Nataniël wasted no time in ensuring that he will not miss out, by pitching his tent at the store entrance.