The garden’s fresh produce bolsters the existing feeding scheme at Greenlands Primary, helping to ensure that the learners are healthy and nourished

What started as an immediate response by our Mobile Soup Kitchen, is now a sustainable and income generating garden providing healthy and daily nutrition to learners and the community of Bishop Lavis, on the Cape Flats.

Realising the need for longer term access to nutritional food, we worked with Urban Harvest, which specialises in the installation and maintenance of organic food gardens, and the first seeds were planted at Greenlands Primary School in July 2015 as part of our Hunger Relief programme.

Due to unforeseen network issues we are
unable to play the video you requested.

With community involvement, the garden, which produced its first harvest in October 2015, now supplies produce on a daily basis to the school’s 300 learners, bolstering its existing feeding scheme and helping to ensure learners are healthy, nourished and able to flourish at school.

A garden committee, along with learners from Grade 4-7, are actively involved in the day-to-day maintenance of the 600m² garden, which is expected to produce on average four tons of fresh produce a year.

As a direct result of the garden, the school also established an income-generating café called the Green Deli, which sells meals at affordable prices, providing much needed funds for the school. 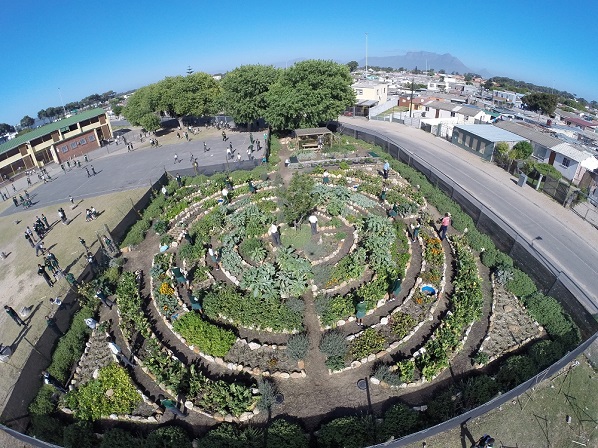 An aerial photograph of the flourishing vegetable garden in Bishop Lavis